Waking up this morning I contemplated where I’ve slept since I left New York at the end of July, until now. It turned out to be rather more confusing than I had anticipated. Having traveled back and forth I counted seventeen different stops, where I had spent the night in eight cities on three continents. Having slept in fifteen different places, occupying ten beds and five couches separately. You might therefore imagine why it feels good to wake up in your own bed, at your own place.

That’s right I have found an apartment here in Nairobi. Keeping the streak alive however, this one too is only temporary, as I’m queuing for a two bedroom apartment. Yeah, I’ll have a guestroom, which those of you who visited me in New York surely will appreciate. Temporary or not, having invested in a pillow yesterday it felt like my own bed. And as much as I like to travel, and appreciate all the friends that have put up with me and offered me a spot to sleep while in Sweden, it is nice to have a place to call your own.

Where I am writing to you from

If there is one thing I’ve learned while living on different places around the world it is that the standard is differing a lot. As do the prices. While I was in Australia as a student I shared a house with two roomies, several spiders, cockroaches and a wombat who had made our chimney its home. I noticed the latter while vacuuming one day, and as I pulled out the couch that was in front of the chimney, there it was. Who were most surprised, me or the wombat, remains unclear. It was nice to finally know what had caused all those scratching noises though. One morning as I was about to brush my teeth, I noticed that one of the cockroaches had laid its eggs in my toothbrush. I apologize belatedly to my colleagues at the Embassy if my breath caused you any discomfort on the day in question. I doubt it comes as a surprise to you that the house was torn down shortly after I moved out.

In New York it was slightly better. Still a broke student I spent the first few months on a fold-able IKEA bed in a hallway/kitchen. Once I got hired I moved to a new apartment, and got to reconnect with cockroaches. In addition I could also add a mouse to my collection of household squatters. More annoying than not being able to cook due to all the vermin was however the apartment’s complete lack of insulation. Once visiting my brother actually thought the Russian neighbors from downstairs was standing next to his bedside. Not to mention that New York gets considerably colder than Canberra, and for those of you comfortably hidden away in your cozy homes in any of the Nordic countries, thus having no clue to what I mean as the houses are properly built, that means that the outside temperature is the same as the one indoors. So then frequent fiery arguments between a teenager and her mom – in Russian – helps to heat things up. Suffice to say I didn’t stay there for too long either.

Once the UN saw it fit to award me with a contract longer than a month – often signed two weeks after the fact – and instead blessed me with a one-year contract, I found a great shared apartment in trendy Williamsburg. I spent two fantastic years there. Two vermin free years at that. I only mention this so that you won’t think too badly of me.

Located on the equator Kenyans don’t have to bother with insulation for the sake of temperatures. Insulation to keep out Russian arguments might still be an issue however. But all things considered it feels nice to have my own place again. It has a few bonus amenities, which I’m sure to enjoy. But ironically my personal favourite so far is the TV. I say ironically because I haven’t had a TV since I left Sweden in 2009, so it’s hardly a must for me. But I have the sport package, and since Kenya is south of Europe, meaning virtually no time difference, I can once again watch football!

Today I caught Catania vs Juventus, Everton vs Liverpool, Chelsea vs United, the end of Leverkusen vs Bayern München and is currently watching Mallorca vs Real Madrid. That’s right, the Kenyan sport package gives you access to every league! 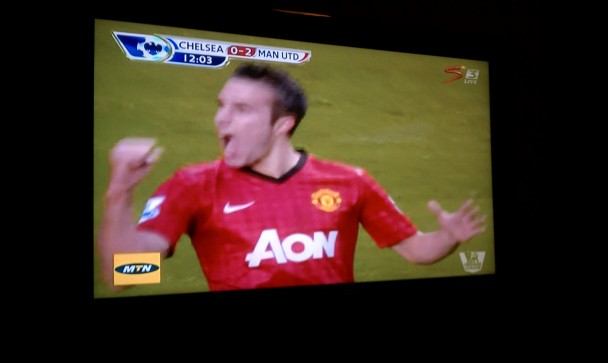 Robin van Persie doing what he does best…

Lying on the couch in my new apartment, watching Arsenal’s R.V.P score for Man U, I couldn’t help to think about my previous homes spread across four different continents. And not having discovered any furry house guests, I appear to have this place to myself. So once my pulse settled, after watching Chicharito score the winner, I thought to myself; I’ll be at home here.