As a former UN employee with a passion for peace and a deep rooted political interest I have followed and read much on the issue of UN Peacekeeping. Despite this I have never grasped the topic.

It has nothing to do with the paradox of ensuring peace by sending soldiers, I get that. No, rather it’s the fact that the UN Peacekeepers seems to be leaving or waving the white flag when they are needed the most. Few have covered this better than Roméo Dallaire, who served as Force Commander of UNAMIR, the peacekeeping force stationed in Rwanda during the genocide. He wrote about it in Shake Hands with the Devil, a book you really should(n’t) read. 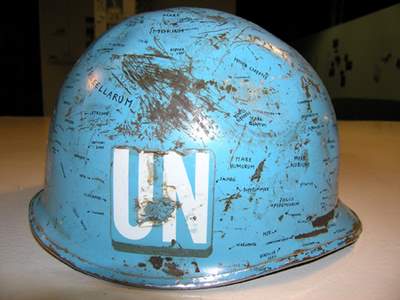 UN Peacekeepers are often referred to as Blue Helmets

(The Norwegians have quite the history of seeming confused when awarding this one haven’t they?)

Taking a short cut on a topic that could easily have an entire library dedicated to it without covering anything but the tip of the proverbial iceberg I’m moving to the 1990’s. Two of the most notable UN failures happened in this decade; the aforementioned Rwandan Genocide in 1994 and the Srebrenica massacre in 1995. This led to some well needed self-examination that ten years later would generate the R2P initiative, which was invoked to enter Qaddafi’s Libya. (Perhaps the first and last time the R2P will be invoked following that outcome?). In 1996, the UNICEF study “The Impact of Armed Conflict on Children” was released. On page 24 it states:

“In 6 out of 12 country studies on sexual exploitation of children in situations of armed conflict prepared for the present report, the arrival of peacekeeping troops has been associated with a rapid rise in child prostitution.”

Sexual abuse came to be associated with the UN Peacekeeping forces. An unfortunate fact I experienced firsthand covering the “International Day of United Nations Peacekeepers” in 2010 as our reporting had to be sensitive to this criticism. A Guardian story from 2005 mentions abuses in DRC, Sierra Leone, Bosnia, Cambodia, East Timor and Haiti. Wikipedia even has a list of human rights abuses. Speaking of the recently mentioned Haiti, there’s also much to support that the cholera epidemic, which has resulted in 600.000 Haitians getting ill and 7.600 deaths, have been caused by UN Peacekeepers. This is however denied by the UN.

Enough with the non-encompassing and highly selective history lesson already, what’s new you ask? Goma is new. I’ve followed it closely for the past couple of days. I must admit mostly for the reason that I have a friend there and was a bit worried. He’s fine – thank you Facebook.

Goma has been overrun by the M23. The UN has 22,000 peacekeepers in the DRC, out of which 1,500 are in Goma. Today I read this BBC article that I hoped would give some clarity, but instead confused me even further as to the role of the UN peacekeepers. It states that:

“… there was no resistance from the nearly 1,500 UN peacekeepers in the city…”

Why not? What’s the point of having them stationed there then?

“A UN spokesman said its peacekeepers had held their fire as rebels took the city to avoid triggering a battle, putting civilians at risk.”

That’s reasonable, fighting could have proven disastrous for the civilians.

“But the UN has said it has received reports that the rebels have abducted women and children from Goma. Killings and looting have also been reported.”

What? This is contradictory. The UN Security Council voted in favour of a resolution classifying rape as a weapon of war back in 2008 and the Security Council has also condemned the recruitment of child soldiers. They are as such aware of the consequences of doing nothing. The story continues:

“Do you open fire and put civilians at risk or do you hold your fire, continue your patrols, observe what is happening and remind the M23 that they are subject to international humanitarian and human rights law?”

My first reaction is, why are you asking this question now, shouldn’t you have thought about that a wee bit earlier? That’s snarky of me I know, I realize it’s just a pedagogical approach to explain a very complex situation. But I do wonder, what is the point of monitoring abuses, aren’t you supposed to stop them?

“In the resolution, proposed by France, the members of the Security Council strongly condemned the seizure of Goma”

Alright, the Security Council is on top of this one. No conflicting interests this time, but an actual resolution. Now we can intervene?

“French Foreign Minister Laurent Fabius has described as “absurd” the UN’s failure to intervene in Goma, calling for a change in its mandate.”

So what does this mandate actually say? The MONUSCO mandate emphasizes amongst other things “that the protection of civilians must be given priority…” and that: “The Mission would also support Government efforts to fight impunity and ensure the protection of civilians from violations of international human rights and humanitarian law, including all forms of sexual and gender-based violence.”

The mandate clearly states that they should protect civilians. The 1,500 strong force found it best to do nothing. None of us can say which action protected the civilian population best. But surely it justifies the question of why they’re there at all if they don’t intervene? It can’t merely be to observe as mentioned above? That does not seem cost-efficient.

I continue digging, but find that the latest MONUSCO press release is from the end of August, their page for press briefings doesn’t contain a single one for 2012. So I turn to the official UN News Centre for enlightenment. There the official UN Spokesperson states:

“Reports indicate that the M23 has wounded civilians, continued abductions of children and women, destroyed and looted property, and intimidated journalists and those who have attempted to resist their control.”

He also notes that MONUSCO is closely monitoring the situation, conducting patrols and that:

“MONUSCO troops will remain actively present in Goma and will continue all efforts within their capabilities to protect civilians from imminent threat.”

Honestly, I am only trying to understand this. Why are the peacekeepers there? What are they allowed to do? If this doesn’t call for an intervention, what does? Is a peacekeeper, a soldier, carrying weapons “actively present” when observing and conducting patrols? Is this the best way “to protect civilians from imminent threats”? And what does “continue all efforts within their capabilities” entail?

I’m a reasonably smart individual with experience of these types of questions and media, and I am not at all interested in appointing blame, but I cannot for the life of me understand anything of this.

This is exactly why the issue of UN Peacekeeping never has made sense to me. If it does to you, please inform me! What are they allowed to do? When? What level of force are they allowed to use to protect civilians? How do you measure the pros and cons of an intervention? If I’m a civilian in Goma how do I know if the peacekeepers will protect me when push comes to shove? How do I make an informed decision for myself, or my family, to wait or to flee? If we can’t answer these basic questions and with the track record of issues surrounding stationed UN Peacekeepers in mind, is it worth it? It’s a simple enough question. To what end?

“The Secretary-General underlines that those who commit violations will be held responsible for their actions.”